The Place & the Project

Watch this 3.5-minute video that details the project and provides a closer look at the work.

Buckroe Beach has a storied past: Originally settled as an English Colony in the early 1600s, the community has transitioned to a commercial tobacco farm, to a fishing camp, to a tourist destination with an amusement park and hotel.

In 2003, the beloved Buckroe Pier was destroyed by Hurricane Isabela, and just a couple years later, the city set out to revitalize the area. The goal was to rebuild the fishing pier and pavilion, reconstruct the family day park, and extend the boardwalk which would complete the promenade along the beach.

How SUNDEK Got Involved

To revitalize and extend the boardwalk, significant concrete work needed to be completed. Kerrick Construction, a Hampton, Virginia-based contractor who had previously worked on municipal projects with the City of Hampton, sought to submit a proposal for the boardwalk portion of the project. Mark Kerrick, President of Kerrick Construction, contacted Bob Miller of SUNDEK of Washington to discuss ideas and the possibility of being a subcontractor for the job.

Without any previous knowledge of the project, Miller agreed to meet at Buckroe Beach to take a look and discuss ideas. Kerrick, familiar with previous SUNDEK projects, expressed to Bob that he believed SUNDEK products and craftsmanship was the right solution for this project, saying, “It’s your canvas—wow them. Let’s make it happen.”

The City of Hampton and the engineering firm on the project, Johnson, Mirmiran & Thompson, Inc. (JMT), opted to have SUNDEK bid on the project as an alternate Valued Engineering option. 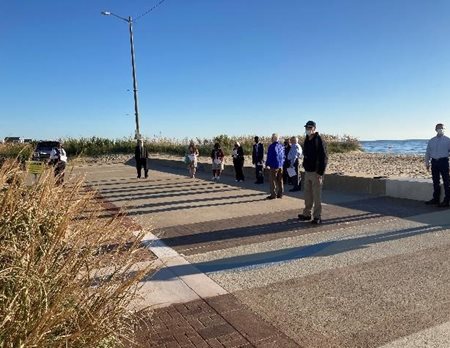 Residents viewed live demonstrations and evaluated mockups completed by the bidding contractors before they voted on their favorite design.

Over the course of three days, SUNDEK completed a live on-site installation in August of 2020, alongside other contractors bidding on the job. At the north end of the boardwalk, contractors created their samples, each 4 feet by 10 feet. The city held a public forum in which community members could vote on the favorite samples. Of the 20 samples, the top choice among voters was SUNDEK. 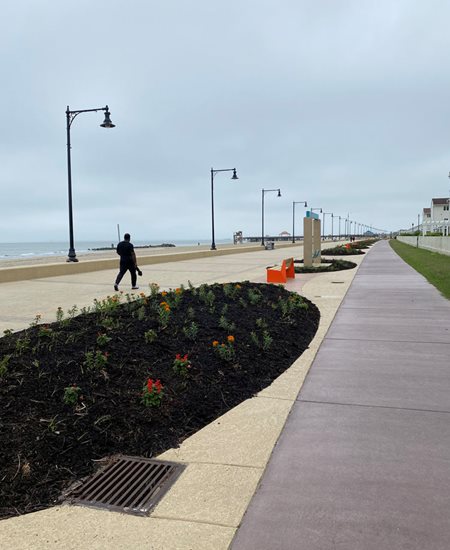 The seawall, which runs along the side of the boardwalk that abuts the sand, was coated in SUNDEK’s Classic Texture in one color: Indian Wheat. 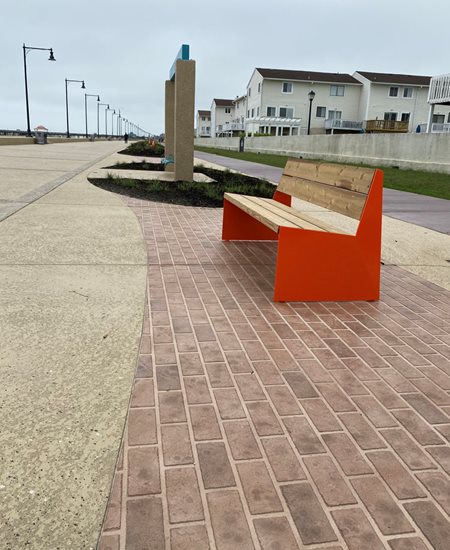 To mimic the appearance of brick, SUNDEK used SunStamp in a Running Bond Brick pattern, using a custom-created color to give it an antique look. For the remainder of the boardwalk surface, they used Classic Texture and created a custom aggregate pattern using three colors: Mission Tan, Bone White, and Sable.

For the boardwalk concrete pavement and columns for bench swings, SUNDEK proposed Classic Texture with a three-color custom aggregate pattern and 12-inch bands at edges and control joints. For the paving between planter ovals, they used SunStamp in a Running Bond Brick pattern, with custom antique color. The seawall would receive SUNDEK Classic Texture in a one-color monolithic design. Surrounding bike paths, the concrete would receive color-tinted sealers to match existing pavers in a different section of the park.

Providing a low VOC finish and Solar Reflective Valve (SRI) of 42 plus, the materials for both the seawall and boardwalk meet and exceed LEED requirements for hardscape materials.

SUNDEK began the first phase of the project in late fall of 2020, but that unfortunately came to a halt due to Covid-19 outbreaks. Due to various reasons, the project didn’t continue until February of 2022.

During the unexpected break, the plan changed a bit. The city decided to add a feature that would end up being one of the most eye-catching and interesting parts of the installation: a human sundial—a surface feature on which a passerby can stand and act as the post of the sundial in order to cast a shadow that indicates the time of day. Completing such a complex design required precise GPS positioning for accuracy. The sundial is adjacent to a decorative compass, and both are visually enclosed within a circle that’s 40 feet in diameter. 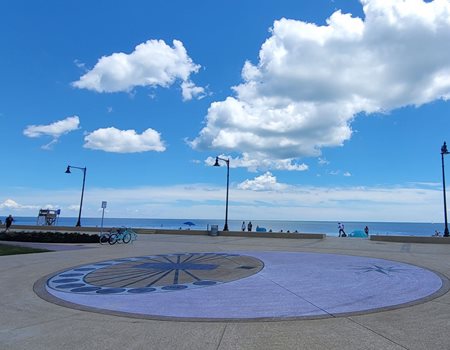 The decorative sundial and compass—which became the pinnacle of the project—add a fun, interactive element to the renovated boardwalk. 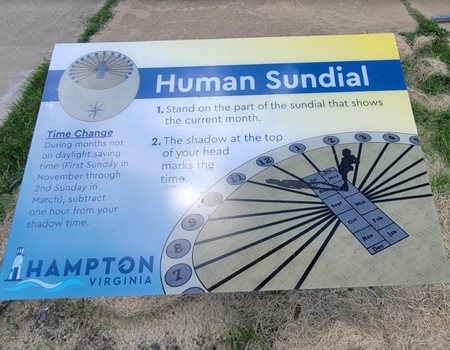 Nearby signage shows visitors how to use the human sundial.

In addition to delays from the worldwide pandemic, the Northeastern Atlantic winds complicated the project. Further, there was a hiccup with the new light pole system that was supposed to be installed on the seawall before SUNDEK’s work could be completed—the light poles weren’t acquired on time. 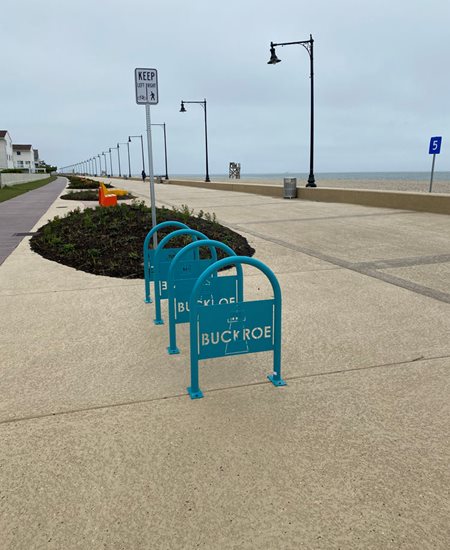 In addition to boardwalk signage, the surface’s design and color choices provide visual cues to help visitors determine where to walk and where to bike. 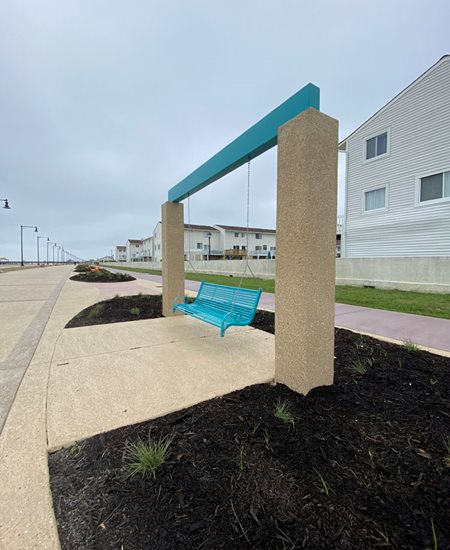 Swing chairs along the boardwalk provide a fun and relaxing spot for people to sit and enjoy beach views. Columns were also finished by SUNDEK using the three-color custom aggregate design with Classic Texture. 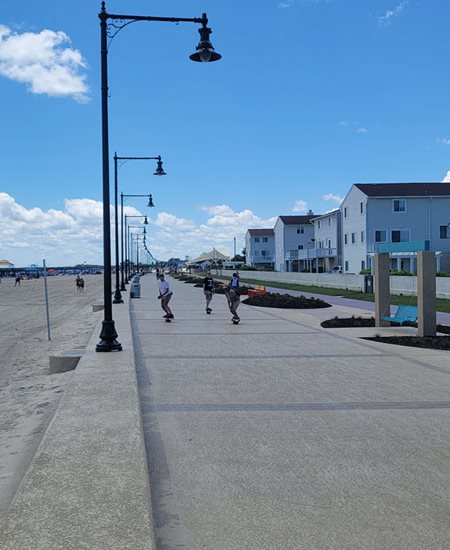 SUNDEK’s Classic Texture provides a durable surface that can withstand just about anything—from foot traffic to skateboard wheel traffic and more! The boardwalk will be a gorgeous for residents and tourists to enjoy for years to come.

Rather than stalling further, SUNDEK decided to box out the pole areas, continue with the remainder of the project, and address those areas later when they were ready.

With a completion date of May 15, SUNDEK fast-tracked the project, working seven days a week to get it done on time. SUNDEK crews worked harmoniously with Kerrick’s crews, diligently removing sand blown in from the intense winds and excavating to the bottom of the seawall.

SUNDEK installed nearly 117,000 square feet of decorative overlays on Buckroe boardwalk’s horizontal and vertical concrete surfaces. The City of Hampton held a grand opening (on time!) for their residents who can now enjoy every single beautiful step on their new and improved boardwalk.