ATD Concrete Coatings used SUNDEK’s SunAcid to stain the walls of a new building in downtown Dallas.
Posted by admin on August 30, 2022 in Blog 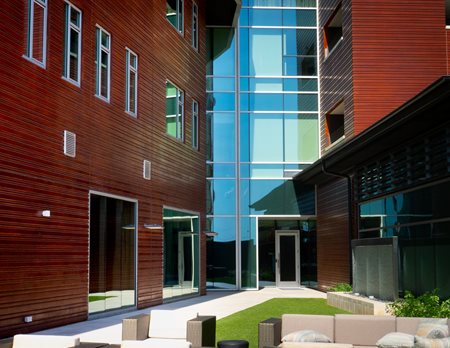 When Buckner Retirement Services planned to construct a luxury retirement community, they set their sights on a desirable location: right in the heart of Dallas and conveniently located by the North Central Expressway. With a location that would put the building on display, David Dillard from D2, the project’s architectural firm for Ventana, had a gorgeous façade in mind: they wanted the structure to have a European terracotta appearance.

Get a free quote

After ATD presented the viable choices for staining and created mockups, the project team chose SUNDEK’s SunAcid in the colors Penny and Cardinal, a muriatic acid-based coloring solution, creates a translucent, mottled look by reacting with the minerals and salts in the concrete. The beauty of SunAcid is that because it penetrates the surface, it becomes a permanent part of the substrate and doesn’t crack or peel. 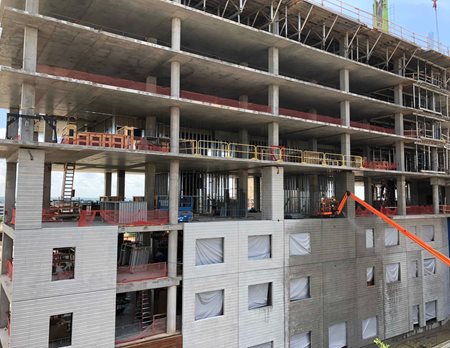 Precast panels were poured offsite then placed in their designated location. ATD crews power washed each panel to remove the release agent to prepare it for staining.

To construct the building, precast panels were poured offsite then transported on flatbeds to the project site. At that point, they were lifted into position with a crane and then welded to the building. Because of all the movement that would occur during this process, the panels could not be stained at the precast yard due to the possibility of chipping and cracking. Instead, crews with ATD needed to stain the concrete onsite.

This posed a challenge. While the centrally located community makes a wonderful site for future residents, the close quarters also made for tight working conditions. Besides the ATD crews, there were contractors on site who needed to place and weld panels, others who needed to install windows, and many more various tasks that were being completed. In addition to all the people on site, there were also cranes, booms, and other large machinery. 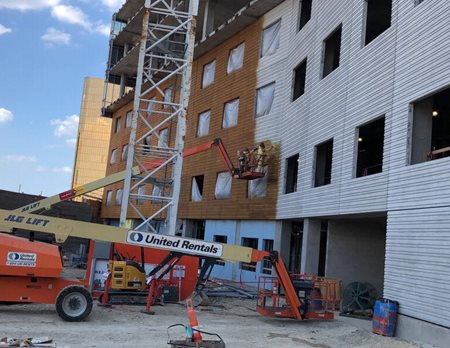 ATD crews used boom lifts to stain each panel on the building. Using tarps and plastic, they covered areas that weren’t meant to be stained to prevent overspray.

Coordination, and communication was key on the project. Every morning, Hernandez and his team met with other staff: window paneling crews, the sealant contractor, plumbers, mechanics, and others. “I had to point out the locations we’d begin and the locations we’d need to go throughout the day,” says Hernandez, noting that there were times he had to stop his crews and go talk to the site superintendent for safety reasons. “Some days, there would be people trying to install window paneling above us. That’s a big no-no with OSHA.”

When the precast panels were created, a release agent was applied so the concrete could be removed from the molds. Stain must be applied to a clean concrete surface, so after the panels were placed, ATD power washed each one to properly prepare them for staining. This step also required coordination to prevent splashing people working on the other side of the panels.

The stain was applied using a sprayer, so ATD used tarps and pieces of plastic sheeting to prevent overspray. In addition to protecting surfaces that shouldn’t get sprayed, they also had to be conscientious about not inadvertently spraying stain near other contractors working on the project.

Because the sealer used for this project has a solvent, they also had to steer clear of the welding crews, as the sealer could be flammable. Those are just some examples that illustrate the serious need for communication and coordination between various teams on this massive project. 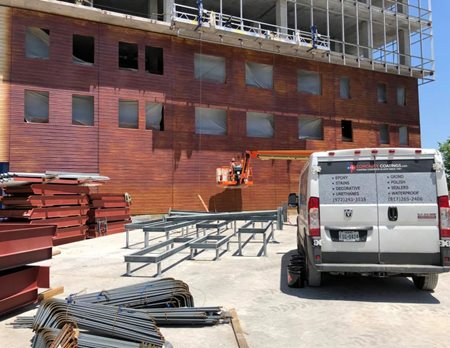 ATD resolved color variation with pigments in the sealer.

Acid stain reacts beautifully with the minerals in the concrete, but that reaction creates a rust residue. So, the day after staining, ATD crews power washed the panels again, this time removing the rust.

The variability of acid stain is viewed as a positive feature, but it also requires a meticulous attention to detail. Because it reacts with the minerals in the concrete, that means the concrete mix and ratios used when the panels were created at the precast site needed to be very consistent. Stain color must also be consistent, as any variation will show up when viewed on a large scale, which required coordination between crews and suppliers. 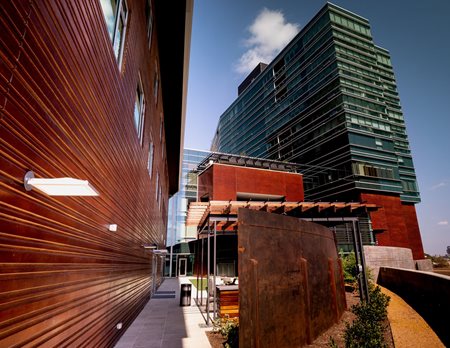 Attention to detail, organization, and coordination with other trades resulted in a stunning building centrally located in downtown Dallas.

On such a large structure, it’s difficult to tell if the staining is consistent when viewing it up close, so at one point Hernandez drove to a parking lot on the other side of the expressway to view the building from a distance. From there, he provided feedback to his crews over the phone. Color variations were also addressed using pigments in the sealer.

Despite the challenges, ATD Concrete Coatings worked diligently, coordinated with other crews, and maintained their strict schedule to create the desired appearance for the building that is enjoyed by residents and anyone who drives along the North Central Expressway in Dallas.

Looking for a contractor to help add color to your walls?

At SUNDEK, we have installers around the country.

Find a contractor near you